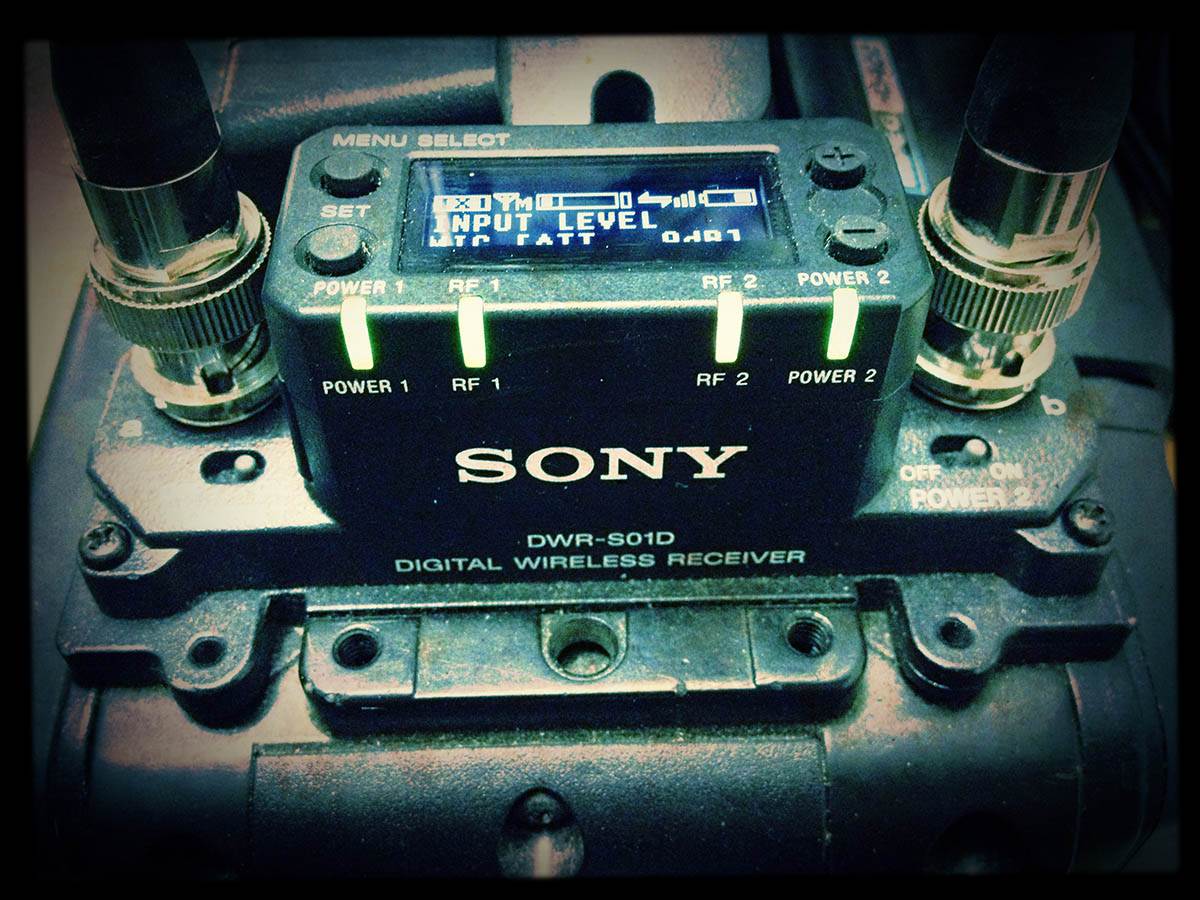 A few months ago we bought the new Digital Wireless system from Sony and here are a few thoughts after taking it out into the field.

To start off: As with most things in this crazy industry on thing is for sure: YOU GET WHAT YOU PAY FOR. This is not an inexpensive system. Its not any more expensive than say Lectro, Sennheiser, Wisycom or any other high end system in the same class. But by paying the little extra you also get a reliable system with the extra features that you might find useful.

We chose Sony wireless for a few reason. First, I’ve had the 855 and 860 diversity systems for the last 10 years and can say nothing but god things about them. I can easily count the number of dropouts I’ve had in that period, which is very very few. They’ve worked over great distances and in some miserable conditions. If this was the next generation from Sony I’d expect nothing less.
Secondly the receiver fits into our PDW-700 and allows 2 channels of wireless audio directly in the slot. Great news!!
Thirdly and this is actually just a bonus is the fact that we own a bunch of Sony lavs already wired for the transmitters.

I think one of the main advantages of this system is being able to control features remotely. Say you’ve hidden a transmitter on a talent, taped down and under clothing for example. Being able to change output, enter a LowCut filter, or “sleep” the transmitter to save batteries is awesome. You can also change a frequency if you run into interference, all directly from the camera meny

or the top of the receiver. The little indicator that shows you battery level on the TX is just so so so useful. No more guess work or running up to the talent to lift clothing to check. Just wish you could actually switch the batteries remotely…. 😉

We do a lot of ENG style shooting for feature news pieces and documentaries where range and rock solid performance is an absolute must. On thing with the Sony system is being able to up the transmit power to 50 mW. I know other manufacturers go even higher but I’ve used 10mW with the 860 and 855 for so many years, I think 50mW will serve all my needs. 🙂 There is also the aspect of battery drainage to consider. When I switched the transmitter to 50mW I could definitelely notice more battery usage. But the option is there to go from 1mW (close sit-down stuff) to 10mW or 50Mw as range increases. In the time we’ve had the system it has worked like a charm on long distance applications and transmission has been solid.

There is also a feature to encrypt the transmission, but this is not a feature I’ve dug into as of yet. Perhaps down the line.

These new transmitters also allow for LINE level input which is great if you’d like to “tap” a mixerboard for example. Very useful again to have 2 channels in the slot providing a stereo pair.

The transmitter are, as expected, really well built in a metal chassi and like my old WRT-860 these DWT-B01 will stand up to a lot of abuse for a long time to come. Also there is a Micro USB port to allow for future firmware upgrades. Units run on AA batteries which I personally like better than 9v. The size of the transmitter is a little smaller than the old WRT. For really small transmitters hiding in hair and such there are other option from other manufacturers.

The optional mixer bag slot attachment is a great way to use this system as stand alone (by a mixer console) or in a mixer bag in the field. Here is a link of some pictures of it attached to our F3.

So any downsides or negative issues I’ve run into. Not really. One thing I think of the Analog VS digital side of it. I come from the analog wireless sound where if there is a dip/hit in transmission you might just get a hiz sound/small break up but still be able to hear a voice for example. Well with digital it is ON or OFF. Its nothing wrong with the system, just how digital works.

Also I’ve had a small issue with the “pilot connection” (feature control) on one of the transmitters to the receiver and connection has been lost a couple of times, and I’ve actually have had to reset the transmitter to factory default. It now works fine, and it may have been a user-issue. I am not a sound guy and user manuals are not my cup of tea. 🙂

Also the “pilot signal” doesn’t have a best range, and I’ve found it looses connection if it’s put to sleep. For example, if you sleep a transmitter you’ve placed on a mixing console on the other side of a room, you’ll make it sleep but might have a hard time waking it. Move in a little closer and it will connect up again.

We have a few other systems as well, lower end ones costing about half of this system. But I go back to my first thought in this post, YOU GET WHAT YOU PAY FOR. You really do. I hesitate every single time we take the lower end systems out into the field, which is not a reassuring way to start a shoot. They’re ok to use in a sound bag with someone monitoring them but for a camera link a high end system is the way to go.

Disclaimer: I have no ties to Sony in any other way than having spent and enormous amount of money on their gear over the years. We payed full price for this wireless unit as well. 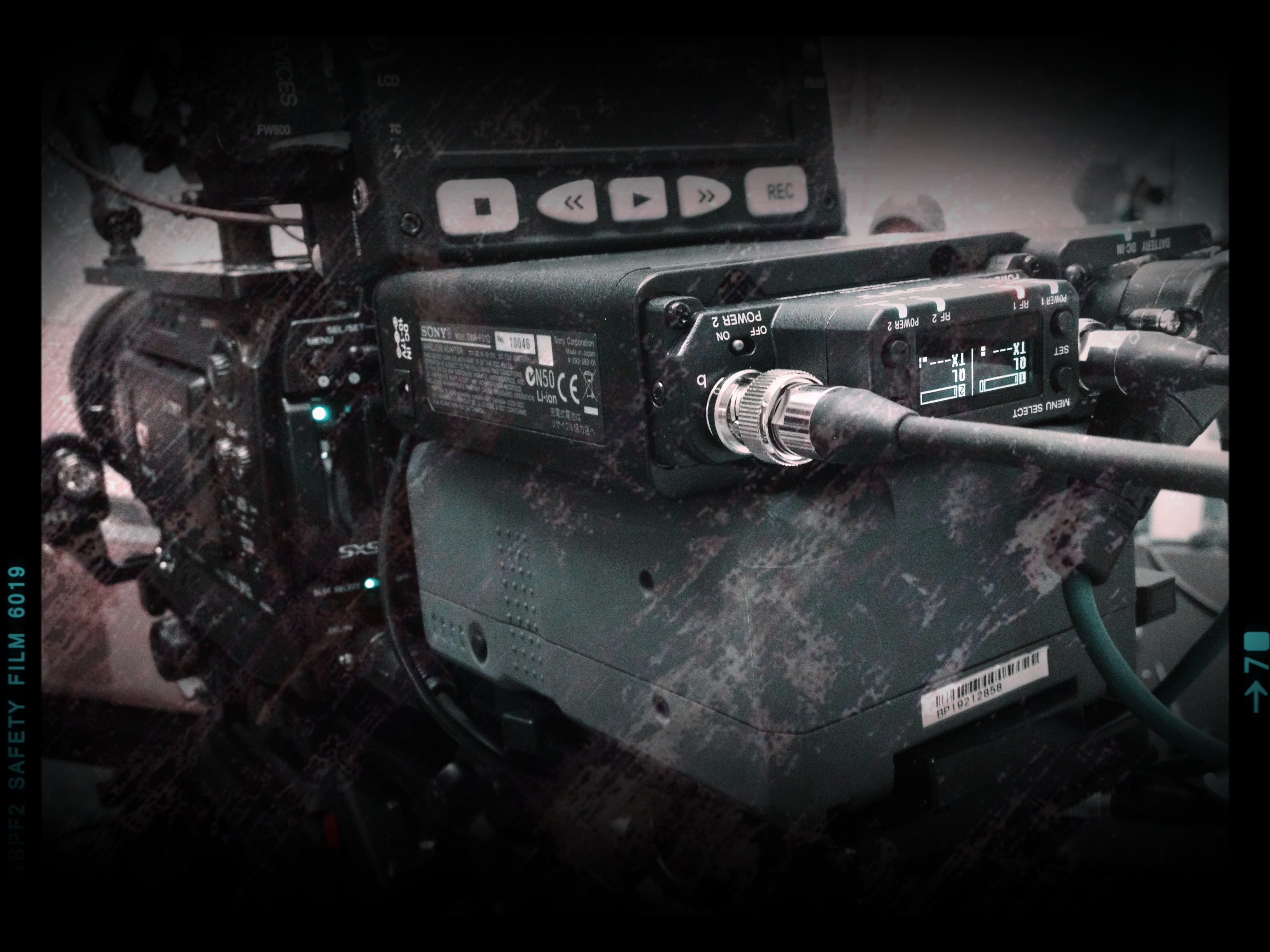 I realize there are tons of options on wireless audio, big, small, expensive, less expensive. On a small camera one might choose to have a small light weight system to minimize form factor and weight. Not to long ago we bought the Sony Digital wireless system (DWR-S01D) and today we got an external case, DWA-F01D for it. Most of the time this 2-channel receiver is housed in the slot of our PDW-700 but we also want to be able to put it in a mixer bag or on the back of our PMW-F3.

The adapter/case has 2 XLR connectors for 2 channels analog audio. It can be powered by a Sony L series battery which is a great option in a sound audio bag. It also has a 4 pin Hirose connector and a consumer DC in power plug making it really versatile in power options. A BNC connector for AES-3 digital audio output as well as word clock for sync also in BNC is included on the side.

I stuck it on the back of the F3 and here are my first thoughts.

First thing: it is pretty big/wide. Sony makes a slimmer case, without the option of powering by battery, which might actually be a better solution for attaching it to a camera. But since we intend to use it in a mixer bag as well we chose the bigger case. Considering all the other stuff we have stuck on there it doesn’t feel all wrong. It is sitting on top on the battery just underneath the PIX240 and it is just as wide as that.

We power the unit through a 4 pin Hirose connector attached to our battery plate. Works great. In the picture below you can also see the AES/EBU output and Sync input. There is also a headphone out with a volume control.

On thing that was s little annoying was that the audio inputs (XLR connectors) were so close together I had to really work to fit 2 right angled XLR’s next to each other. I had to angle one to the side. I understand to fix this would have made the unit even wider but it was still annoying… 🙂

This is something we’ll use when flying the F3 on a steadicam or moving about without being tethered.

So to summarize: if the receiver was going to be on the F3 all the time, I would get the slimmer adapter DWA-01D, but if you want a versatile case for stand alone use or in a mixer bag plus more power options this is the one to get. So great to get this system up and running on the F3 as well.

Disclosure: No one asked my/payed me to write this post. All opinions are my own. We payed full list price for this unit. 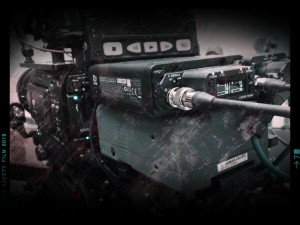 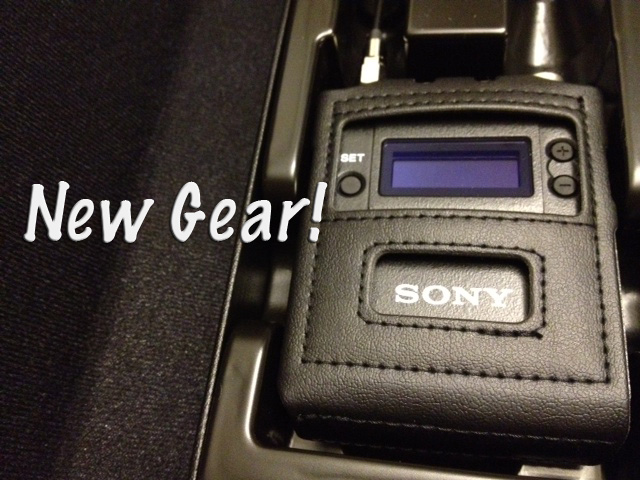 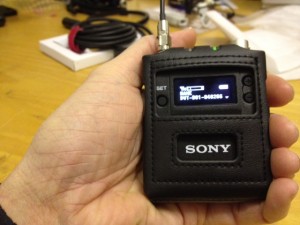 Today we got our new sound gear delivered from Scandinavian Photo in Malmö. We’ve bought the Sony Digital wireless system with a DWR-S01 receiver and 2 DWT-B01 transmitters which offers great features and allows us to use 2 channels of wireless audio in the slot of the XDCam PDW-700.

Other than being an all digital system with 24-bit/48-kHz digital audio it has some really great option such as being able to control power/sleep, attenuation, lo-cut and RF out directly from the receiver. The system boost a dynamic range of 106 dB, a frequency response of 20 Hz to 22 kHz, and an excellent system latency of 3.6 ms. You can even encrypt the audio if you wish.

So a pretty cool system. We expect great things from this system and I’ll post back in a few months to update on what I think.
We already have 2 diversity systems from Sony (WRR-860) and if these new ones are half as good as the old ones, we are in for a treat. 🙂
My view on wireless systems (as well as most gear) is that you get what you pay for. We own another 4 less expensive systems and there is absolutely no comparison. 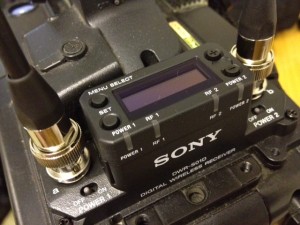 p.s. This is the only system which will allow for 2 channels in the slot of the XDCam 700/800. Sony has shut all other manufactures out of the second channel in the slot…  d.s.